The blues is a landmark of African American culture, and has become popular around the world. Yet efforts to celebrate the importance of this music often ignore its most vital messages.

Today is ‘International Blues Music Day’. Around the world, but particularly in the United States, blues fans are getting together to listen to, perform and celebrate a style of music that is widely recognised as one of the most influential cultural achievements of the twentieth century. If you’re at all familiar with the genre, you’ll know of its history: from humble beginnings amongst African Americans in the segregated South of the early twentieth century, the music moved north to Chicago as postwar African Americans searched for a life away from Jim Crow. And then to 1960s Britain: a generation of young musicians and listeners successfully brought the genre back into the public eye through the popularity of blues-tinged rock by groups such as The Beatles, The Rolling Stones, and The Yardbirds.

The worldwide recognition of the blues has since continued apace, especially since the United States Congress declared 2003 the ‘Year of the Blues’, in light of the music’s influence on subsequent genres, and its role as an international ‘ambassador’ for American culture. I’m writing this blog post from the Orkney Islands, surrounded by fishing boats and sea birds off the northern coast of Scotland. In September, they’ll hold their annual Blues Festival.

Yet while the success of the blues across the globe is undeniable, I don’t think that emphasising the music’s worldwide acclaim is necessarily the best grounds for celebrating the genre. Rather, there is a more immediate value in the music: its historic role in twentieth-century African American culture.

Most readers will probably be rereading the sentence above; it sounds obvious, doesn’t it? More to the point, we already know and recognise that the blues was born of the social experiences of African Americans. In this blog post, however, I want to demonstrate how well-meaning people and organisations are actually neglecting this aspect of the blues’s importance.

Take a look at this video about Muddy Waters below, published by the Mississippi Blues Commission (hereafter MBC) in 2010.

It begins straightforwardly enough, highlighting Muddy Waters’s role in the transformation of rural ‘Delta’ blues into ‘electric’ blues. As Living Blues founder Jim O’Neal points out, this development coincides with the journey that Waters and countless others made to industrial cities in the north, such as Chicago, in search of better employment prospects. In Waters’s words: ‘I felt like I was good enough to get on record, and where I was living I didn’t have a chance.’

The film then highlights the popularity of Waters’s ‘urban’ sound with Chicago’s black audiences, and its influence on other blues musicians such as B. B. King. At this point, the film turns to the first impressions of British musicians Robert Plant (Led Zeppelin) and Bill Wyman (Rolling Stones) on hearing Waters’s music. Their responses are innocent enough: they give us an idea of what it must have been like to hear for the first time a genre that, in Plant’s words, provided ‘a window into a culture that we had no idea about’.

Yet it is Bonnie Raitt’s statement that becomes slightly problematic:

…and then some little kid in California, or Elvin Bishop, or Paul Butterfield, or the Rolling Stones, get to celebrate and somehow relate to the universal call and the power of this music, and to blow it out into rock n’ roll. And then to turn around and be able to give Muddy what he deserved, which was worldwide acclaim.

As far as the MBC’s film makers are concerned, Raitt’s words are the icing on the cake: the blues has gone from a music of the African American south, to Chicago, to (white) Britain, and then to the world. The blues has more than just global appeal; it has ‘universal’ power.

I want to look more closely at this transformation from rural South to ‘universal power’. The blues has always meant something to its performers, because of its connection to the performers’ direct experiences of the society in which they lived. For Waters this was to do with his own journey from the Delta to Chicago; for Robert Plant it was discovering a new form of cultural expression that offered something different compared to his existing worldview.

But is it right to interpret the blues as having ‘universal’ appeal when the music originated in a society so affected, so determined, by the institution of segregation? The idea that the blues is ‘universal’ often draws our attention away from really understanding what the blues meant to communities under the hand of Jim Crow, both in the south and in Chicago.

Many modern blues audiences understand the music to have originated as a form of authentic African American ‘folk’ music, immune to commercial influence and set apart from other types of music. While thinking of the blues as ‘folk’ music is a good way of demanding recognition for the genre (i.e. it is important cultural heritage and needs preserving), the category of ‘folk music’ ignores the complexity of the blues’s meanings for its original audiences. African Americans in the 1930s, 40s and 50s heard the blues as popular entertainment, where the boundaries between what we would today call ‘jazz’, blues, and ‘rhythm and blues’ were considerably more permeable. We would be surprised, for example, to learn that the semi-professional Muddy Waters (still living in Mississippi) enjoyed listening to Fats Waller, Louis Jordan, Count Basie, and even Gene Autry.

That the urbane, sophisticated sounds of these musicians were readily available in the Delta gives lie to the narrative of rural ‘Delta’ blues becoming urbane ‘electric’ blues when Waters moved to Chicago. What would be infinitely more interesting to explore, of course, would be the ways in which ‘urbane’ and ‘rural’ sounding styles of blues coexisted in both the Delta and Chicago, or that Waters’s more direct and ‘downhome’ style actually follows on from the more sophisticated sounds of contemporary rhythm and blues.

Thinking along these lines would lead to a further investigation of what the distinction between ‘urban’ and ‘rural’ meant in postwar African American culture. As historian Adam Green has pointed out in his book Selling the Race, the postwar period saw the growth of a nationwide black American sense of identity with a markedly cosmopolitan outlook. Musicologist Guthrie P. Ramsey has also highlighted the reciprocal nature of cultural exchange between northern and southern states at this time, showing how people, music and performers circulated far more freely than our current narratives allow. What, then, does ‘downhome’ mean, if people ‘downhome’ were listening to music from the urban north, and if musicians from the urban north were frequently traveling back down south?

The story of the blues we’re most used to hearing – where the music develops in tandem with its movement from the American south, to the north, and then out into the world – has been set up with this end point in mind. Promoters, critics, listeners and performers alike want to recognise the ‘universal’ appeal of the music, setting up a narrative of the blues’s growth that leads towards this goal.

But this has serious implications. By taking the blues’s universal appeal as evidence of its cultural worth, we are effectively saying that the music’s role in African American culture isn’t enough to grant the music recognition. Understanding what the blues meant to black Americans throughout decades of racist oppression is held to be less important than recognising the blues’s adoption by people around the world, who have often not faced racist oppression. 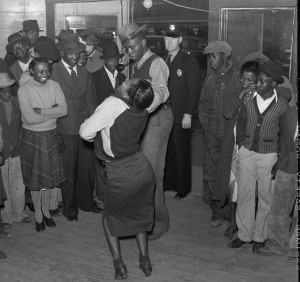 Under the watchful eye of Jim Crow – Clarksdale MS (1939)

The MBC video does not tell us why Muddy Waters was important to African American audiences, aside from that he ‘updated’ the sound by adding harmonica, electric guitar, and piano (he wasn’t the first to do any of these – but that’s another story). But what is impressed upon us when watching the video is that Muddy Waters’s music meant something to white people. As Bonnie Raitt points out, the Rolling Stones ‘[turned] round and gave Muddy what he deserved, which was worldwide acclaim.’ This implies, as blues scholar Ulrich Adelt has pointed out, that a blues musicians’ popularity with his original African American audience is viewed as only incomplete success.

The MBC video could have validated the blues by focusing on the music’s meaning for the African Americans who lived through the decades when American white supremacy was at its most ugly and most untenable. Instead, the video validates the blues by focusing on how important it is to everyone else. The genre’s ‘complete’, ‘worldwide’ of ‘universal’ success is granted – apparently – by white people’s acceptance and recognition of it. Does this suggest that African American cultural value on its own isn’t important enough?

So, on International Blues Music Day, let’s take a rain check on applauding the blues’s ‘universal’ or ‘worldwide’ acclaim. Let’s ask ourselves how important it is to hear the blues as an international music if, by doing so, we omit to hear it as part of African American history, society, and identity. This does not invalidate white American or white British enthusiasts’ deep-felt love of this music (I include myself here). But I do think we should stop pretending that the best way to honour the blues is to celebrate its supposed universality, as though recognising its historic meaning for black Americans isn’t sufficient. To do so isn’t to celebrate the blues – ‘the soul of America’ – at all; rather, we celebrate only one part of it, and continue to ignore the African American history that has always been ignored.

This work is licensed under a Creative Commons Attribution-NonCommercial-NoDerivatives 4.0 International License.

8 thoughts on “Whose Blues? How we risk destroying blues music’s heritage even as we try to celebrate it.”